It’s been almost a decade since the crisis that reconfigured the world financial system occurred, and years since the last major commodities cycle peaked. The past months have shown signs of improvement for mining firms across the world, as some metals prices have begun to rise and investors have shown an appetite for new projects. But the situation is still a little gloomy, perhaps in Africa most of all.

As companies struggle to raise funds through conventional channels, they are increasingly aware of private equity (PE) as an alternative – and PE funds have rapidly upped their game when it comes to under-standing African mining. At times the buzz around PE financing has been a little over the top. In 2013 there was a sense that PE funds would come to the rescue of African projects, great and small, and fill a gap where banks and other lenders had fallen away. This hasn’t happened – at least not yet.

The scale of new investments has fluctuated since then. But PE investors are here to stay, and the way they approach mining participation is already reshaping the industry. As Dimitri Cavvadas, partner at Canadian law firm Fasken Martineau has noted, PE deals present challenges for funds and miners alike. From the miners’ perspective, these deals can be expensive – involving the surrender of some direct control or future production streams. They can also be intrusive, requiring the firm to open its books or adapt its operational approach, and the financing transactions can be much more complex than standard equity or debt raisings. From the perspective of the funds, investment in African mines requires a stringent level of due diligence, various regulatory hurdles and uncertain timelines for project development and returns.

It’s clear that PE approaches mining in a different way to many other sectors. In a Mining.com article, Michael Scherb, PE group Appian Capital Advisory founder, says there are key differences with regard to PE in the mining industry. ‘PE in mining is a misnomer because traditional PE principles don’t apply to mining.

‘Whereas most of the returns in PE are generated from leveraging a producing project or financial engineering, in mining value is created by providing capital and de-risking a project through the value curve into production. What works in mining is strategic capital – not discretionary capital.
PE in its purest form doesn’t transfer over into mining. That’s because it makes use of leverage, and in mining it’s easy to get caught in a price downturn,’ he says.

Charting the expansion of PE investment in mining globally is a simple feat. In 2013 there was a flurry of activity as senior mining industry figures were tapped to lead large new minerals-focused PE funds – notably Mick Davis, former CEO of Xstrata, and the X2 fund backed by US PE group TPG.

According to data compiled by the Financial Times and analytics firm Preqin, mining-focused PE funds raised around US$10.2 billion in the five years to 2013, five times more than the period from 2002 to 2007.

In 2014, law firm Berwin Leighton Paisner reported that US$2 billion of PE funds had been invested in mining, out of US$8 billion raised for the purpose that year. Again in 2015, the Wall Street Journal reported that the value of annual PE mining investments had more than doubled to US$4.53 billion, and US$4.5 billion of streaming deals were also done, by both PE and institutional investors. 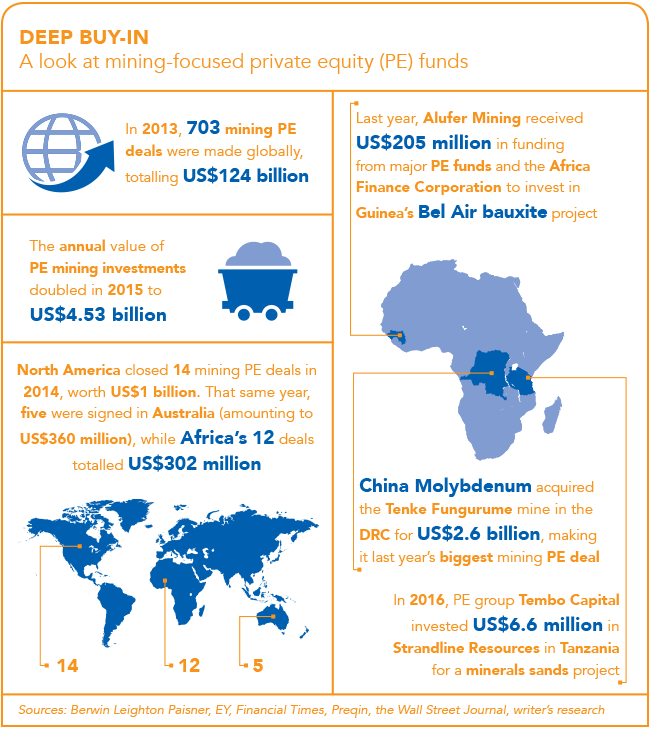 To some extent, 2015 was the high-water mark for PE deals, despite upbeat predictions at the beginning of 2016. There has been a fall in the scale of PE investments – and Africa benefited less than other key mining regions globally between 2013 and 2016.

In 2014, for example, 14 major mining PE deals took place in North America, worth US$1 billion. Australia saw five deals worth US$358 million, and in Africa there were 12 PE deals valued at approximately US$302 million – the continent saw around a quarter of all PE deals but only 15% of global investment.

This was not the case for mining only. PE across all sectors in Africa fell to US$2.5 billion in 2016, according to Reuters – down from US$8.1 billion the previous year, indicating that PE concerns were not focused on mining alone. But a closer look at recent developments shows that PE remains a dynamic force in African mining in terms of certain minerals and places.

Although it wasn’t a good year for major PE mining deals, South Africa saw one of the larger investments in 2016. Centaur Holdings, a Dubai-based PE firm, completed its acquisition of the De Roodepoort coal project in South Africa’s Mpumalanga province. The project is estimated to hold 100 million tons of thermal coal in export and domestic grades – Centaur has said it will seek to raise around ZAR500 million to finance development of the project.

Perhaps another sign of how slow PE activity was in 2016, another often-cited deal represented around just US$6.6 million in value, although this is still an important sum for a junior project. The investment came from minerals-focused PE group Tembo Capital and went to Strandline Resources in Tanzania. The company is developing a high-grade minerals sands project and the investment gives Tembo 20% ownership of Strandline.

This year has already seen some significant activity. So far, one of the biggest PE deals of 2017 has taken place in Guinea. In February, Alufer Mining announced that it had secured US$205 million in funding from a consortium comprising several major PE funds, as well as the Africa Finance Corporation. The deal is interesting in that it brings together major PE investors, including Resource Capital Funds, which to some extent led the way in African mining PE deals – its first mining fund was launched in 1998.

Also involved in the deal is Orion Mine Finance, an active player in mining PE deals worldwide. Orion’s agreement with Alufer includes a six-year off-take agreement for the fund, which typically strikes mixed deals including direct equity, revenue streams and off-takes. Alufer is developing its flagship Bel Air bauxite project in Guinea’s coastal region – its Guinea assets comprise a JORC-compliant resource of around 3 billion tons of bauxite, with a notably high alumina grade. This is a well-timed PE deal, which comes as aluminium returns to life on commodity markets. First production at Bel Air is expected in 2018. 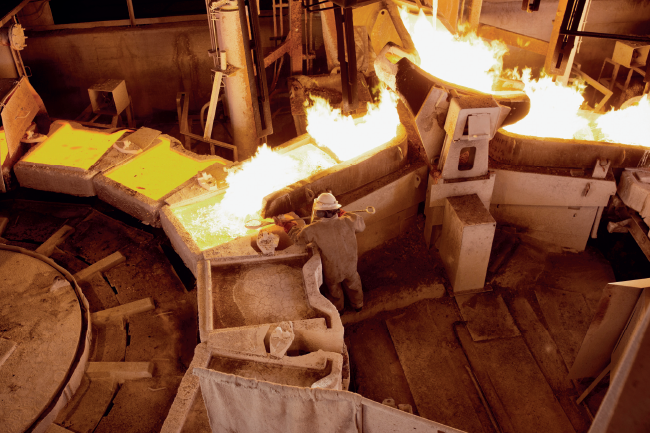 As PE groups size up mining investments in Africa, they are in competition with various other investors, each with their own attractions for mining houses and African states. Resource Capital Funds partner Ross Bhappu notes in an online Mining Markets interview that a multitude of larger funds and conservative institutional investors are paying closer attention to African mining – either investing through PE funds such as Resource Capital or searching for ways to directly participate. ‘A lot of investors are waiting to see your track record and to be able to test a hypothesis over a number of years. Keep in mind, they’re putting a very small percentage of their overall portfolio into our sector, but they are saying this is an important sector to be in,’ he says.

Although Bhappu argues that there are relatively few bidding wars over particular mineral assets, other PE managers often note competition from sovereign wealth and state investors. The way state investors operate, as they seek strategic resources to support their industrial or military sectors, often brings them into competition with PE funds interested in the same minerals.

In an interview with the Financial Times, the MD of Denham Capital Bert Koth outlined the competition that PE funds face from strategic Chinese state investment. ‘Chinese buyers have lower cost of capital than a PE firm, and if an asset has strategic value a PE should not compete. For the few good, large high-profile assets, strategic buyers will always outbid PE.’

Chinese companies certainly have been active in African mining – one of 2016’s biggest deals was China Molybdenum’s US$2.6 billion acquisition of the Tenke Fungurume copper-cobalt mine in the DRC, dwarfing any PE deals that year. But despite their relative current inactivity, PE remains an important source of finance for African mining houses, big and small. PE funds do their research extremely thoroughly, and move when they are quite sure of an asset’s value.

Future large PE buy-ins to African projects are likely, boding well for the continent’s mining sector as a whole.