Angus Melbourne may have started his speech by nodding to the past, but his focus – like everybody else’s at Brisbane’s Austmine 2019 mining conference – was firmly on the future. As chief commercial and technical officer at Orica, Melbourne took to the stage to tell delegates about Orica’s 140-year history in the Australian mining explosives business, before turning the topic to future technologies.

‘Blasting is one of the few processes in the mining value chain that remains largely untouched by automation,’ he said. ‘As mines go deeper and orebodies become more remote, the case for blasting automation becomes clearer.’ Melbourne then played a video clip from CMOC Northparkes in New South Wales, where an entire sub-level cave copper mine had recently been the first to adopt Orica’s WebGen wireless initiation blasting system. As the talking heads and voice-overs confirmed, CMOC Northparkes had seen significant improvements in safety, productivity and ore recovery since making the change.

Blasting is – and always has been – one of the most dangerous and expensive parts of any mining operation. If you go anywhere near an active mine, you’ll be surrounded by constant reminders of the dangers related to blasting.

Just recently, Gwede Mantashe, South Africa’s Minister of Mineral Resources and Energy, paid a visit to homes in Mpumalanga’s Ogies coal district, where he was shown cracks in the walls caused by blasting at nearby mines. At the same time, blasting at the Afrimat quarry in KwaZulu-Natal’s Mpushini valley was put on hold while the Department of Mineral Resources and Energy investigated complaints of property damage caused by the explosives; as reports came through from Zimbabwe that nine illegal miners had died during blasting work at the Jumbo mine in Mazowe.

Yet by using Orica’s wireless technology, CMOC Northparkes has succeeded in eliminating the danger while reducing costs – much to the relief of the miners on-site. As one production engineer said in the video clip: ‘We don’t have to access the brow. We don’t have to be there at all.’

Roberts says Basil Read Mining first simulates its blasts so the shock waves don’t all meet at the affected properties at the same time. ‘The radial shock waves compound themselves, so when we time our blasts we ensure that those waves don’t overlap at a point where our neighbours’ properties are located,’ he says. ‘The software we use allows us to predict exactly what the outcome of the blast will be, and to make those small but important changes to the blast design.’

Still, talk about mining innovation tends to focus on digitalisation and automation, with explosives often seen as a necessary evil. After all, what more can you do with a few sticks of dynamite? But more and more companies are now answering that question, with a range of devices and formulations specifically designed to make mine blasting safer, cheaper and more efficient.

Orica’s WebGen technology, for example, is a step towards full automation of drill and blast operations, as it allows groups of in-hole primers to be wirelessly initiated by a firing command that – crucially – communicates through rock, water and air. (This removes the requirement of a physical connection to each primer in a blast.)

As Melbourne said at the launch of the system, the WebGen 100 wireless blasting system not only improves safety by removing people from harm’s way, but it improves productivity by removing the constraints imposed by wired connections. Importantly, it’ a critical pre-cursor to automating the charging process, he added. According to Melbourne, the entire industry is moving rapidly towards an automated future and the introduction of WebGen signifies that Orica is serious about being a big part of it. 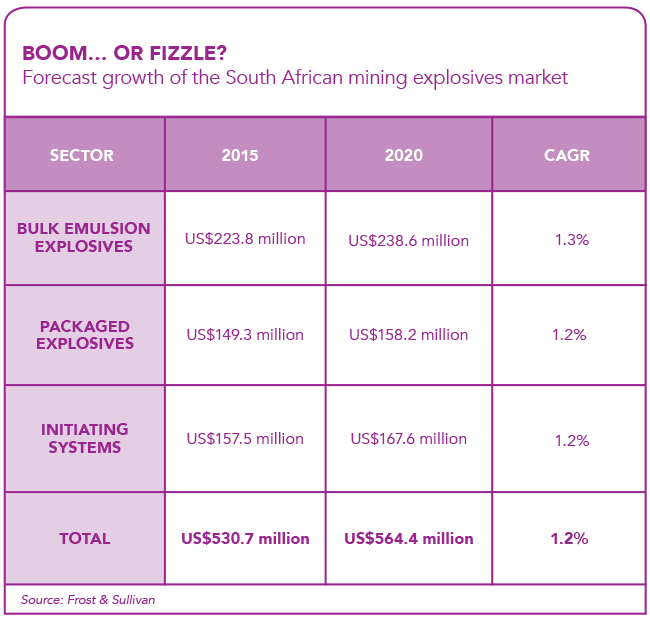 Drill through the PR fluff, and you’ll find he’s right: blasting technologies such as this allow for the extraction of ore pillars that previously could not be recovered in underground operations. By combining a system like WebGen with the Temporary Rib Pillar (TRP) blasting method, the main ore of a panel can now be blasted and extracted while the TRP holds back the waste rock backfill. And by blasting those inaccessible pillars, miners can deliver reduced dilution, increased truckfill factors and improved overall productivity.

This will enable controlled blasting while bridging what Ashlin Pillay, AEL product manager, calls the ‘detonator divide’. Shock tube detonators are non-electronic, with an explosive powder at one end of the tube. When that powder is activated, it generates a percussive shock wave that runs the length of the tube and initiates a detonator at the other end. ‘AEL identified a gap in the market between shock tube and electronic detonator offerings,’ says Pillay. ‘It is to this end that DigiDet ST has been developed to address the market need and as such, elevates initiation systems to new technological levels.’

Electronic initiation systems and centralised blasting are key focus areas for the explosives industry. By offering precision, flexible timing and smart self-diagnostic capabilities, these systems are helping to improve safety before, during and after blasting takes place. AEL’s IntelliShot, for example, is used in conjunction with the DigiDet ST to offer fast and simple deployment, autonomous detection and testing of detonators, and energy monitoring right up to the point of blasting.

Key, though, is the long-range, 6 km communication capability, which takes people far out of harm’s way. As Pillay says: ‘Blasting remains the most cost-effective form of rock breaking, with the risk of safety to the user being of critical importance.’

Moving the explosive to the blast site remains a safety concern. The industry is steadily moving from conventional packaged explosives to emulsion explosives, precisely because of this risk.

Now, instead of explosives that look like sticks of dynamite, you’re more and more likely to find emulsions that closely resemble smears of Vaseline. Emulsions only become an explosive when they’re mixed ‘in the hole’ (in other words, right at the detonation point) with a sensitiser solution. This reduces the risk of theft, and makes the transportation of the explosives a lot safer and easier.

Another safety concern relates to the greenhouse gases generated during mine blasting – and the dangerous excess fumes that result from poor blast design. Tony Rorke, technical director at Bulk Mining Explosives, explains the risks in a recent online post, outlining the downstream activities that add to a mining operation’s carbon footprint. He cites research showing that for every cubic metre of rock mined, about 4 kg of CO2 is produced by the explosives; 5 kg of CO2 by the process of loading and hauling; and 27 kg of CO2 by crushing and milling.

Rorke then highlights nitrous oxide (N2O) – the notorious ‘forgotten’ greenhouse gas – as being particularly dangerous. Miners will know nitrous oxide from the tell-tale orange smoke cloud that belches up after a detonation. ‘This can be caused by water in the ground or by poor blast timing,’ he says. ‘It can also result from blasters not taking into account the nature of the rock and how this could damage explosives – causing them not to react properly.’

That’s why blast design and timing design are so important. As Rorke explains, a bad blast (where not all the explosive is fully detonated) will produce N2O fumes, along with a raft of other negative outcomes.

‘An important negative result of a bad blast is difficult digging conditions,’ he writes. ‘Loaders will struggle to dig where the required fragmentation has not been achieved, for instance. This means the machines will burn more diesel and emit more CO2. By blasting badly, a mine will also effectively be losing ore, so despite creating all these extra greenhouse gases, there is even less ore to show for it. The result is that more mining is necessary to reach the targeted production levels.’

And so it comes back to efficiencies. Mines are under immense pressure to reduce costs, improve energy efficiencies, minimise waste and – above all – promote safety, both for miners and for the environment. And although some mining companies might be looking elsewhere, the message from explosives companies and individuals like Rorke, Pillay and Melbourne is clear. Much of that can be achieved through the boom in smart, safe, precise, automated, remote blasting.