‘I atten­ded a fully sponsored mining course at the University of Johannesburg, titled Mining for Non-miners, which among others included economic geology, ore reserves and pay limits, underground mining as well as mining projects. This has empowered me to participate more knowledgeably and regularly in mining, processing and engineering meetings.’

Harvey is among the select group of bright and ambitious university graduates recruited to the programme to super-size their mining careers. BLAST stands out globally because it offers incumbents ‘three real jobs across two continents in four years’. Itumeleng Mogatusi – a geotechnical hydrogeologist who is also on the programme, values its personalised development. ‘While others prepare you for a particular job within the same function or commodity, BLAST offers the opportunity
to become a multi-disciplinary professional with cross-functional, cross-commodity international experience,’ she says.

That’s where the ‘three real jobs’ come in. The first is closely aligned to the graduate’s field of study and typically results in a profes­sional qualification (such as a government certificate of competency). The second job is aimed at gaining international experience and multi-commodity exposure in Anglo American offices or exploration sites across the globe. The third then positions participants in one of the group’s business units. ‘From day one, you are given real responsibilities and oppor­tunities to make a difference,’ says Ntokozo Nyathi, a BLAST graduate and process engineer.

He adds: ‘Your career path is unique and the opportunities are largely up to you to grab them, be it in the corporate office or the mines, plants, refineries – South Africa, Brazil, Chile, Canada, Finland and so on. I came into the programme knowing that I want to spend my formative years becoming a fully fledged metallurgist. After just a year I was made project manager of a plus-ZAR8 million project. The skills I picked up will carry me for the rest of my career.’

While only high achievers are recruited for the programme, there are many other bursary and training opportunities at mining companies for young people wanting to forge a career or simply make a living in mining. And the good news is that despite the slump in mining, most of these programmes are still running.

One reason for this is the licence to operate – mining companies commit to youth development as part of their social and labour plan but often go beyond mere legal compliance when it comes to providing desperately needed employment (as well as career guidance, education, training, skills development and mentorship) for youth in the host and labour-sending areas. The Mining Charter requires miners to invest 5% of their annual taxable payroll into skills development, in addition to the general 1% skills levy that companies need to pay.

As a result, the mining industry invested a total of about ZAR5 billion in skills development in South Africa in 2015 alone – of which more than ZAR1.5 billion went towards higher education. The South African Chamber of Mines breaks this down: ‘The mining sector prides itself that over the past five years it has supported around 12 500 students by providing them full bursaries to study at various tertiary institutions. During the same period, 5 500 students and graduates participated in mining industry workplace experiential learning programmes and were provided with learner­ships and internships in workplaces.’

The need for high-end and scarce skills is the second reason why mining companies continue to invest in youth development and training. ‘It’s important to look after the future talent pipeline even in times of downsizing, even though there may be fewer opportunities,’ says Chris Nthite, AngloGold Ashanti vice-president of group communications, strategy and business development.

‘This means that we must constantly be seeking young, talented graduates, bringing them into the organisation and ensuring that they are trained and deve­loped in a way that sets the organisation up for future success.’ 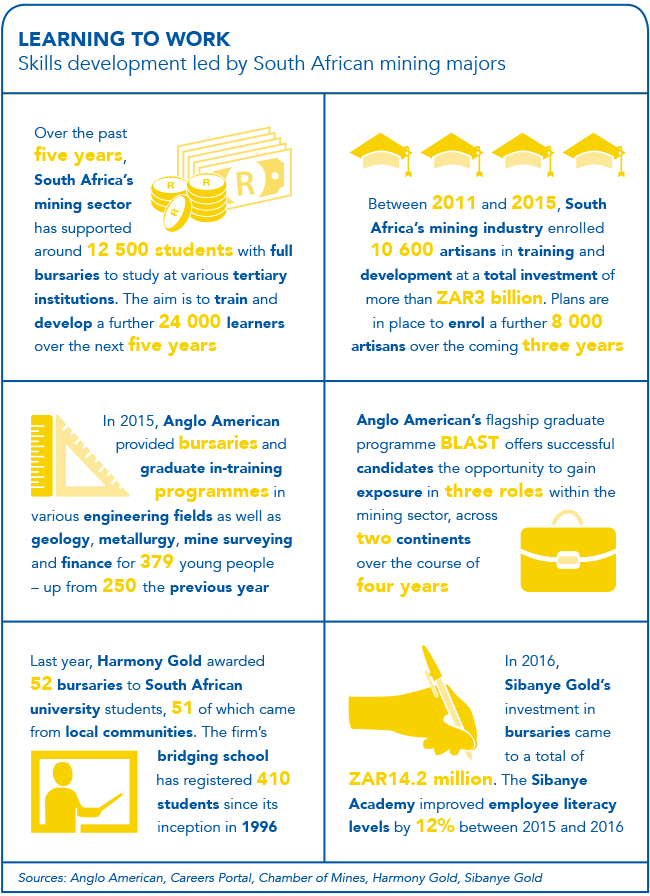 The Chamber of Mines emphasises the development of high-end skills as ‘critical for the advancement and sustainability of the mining sector’. So critical, that the industry, through its Mineral Education Trust Fund, supplements the salaries of mining engineering academics in all the country’s mining schools (based at the universities of Pretoria, Witwatersrand and Johannesburg, as well as distance-learning university Unisa).

‘Without this support there would be haemorrhaging of talent out of the universities into industry in search of more competitive remuneration,’ Cuthbert Musin­gwini, head of the Wits School of Mining Engineering and president of the SA Institute of Mining and Metallurgy, told the Chamber of Mines in May He added: ‘Secon­dly, industry provides financial support for multimillion-rand infrastructure such as laboratory equipment, teaching facilities and research facilities that can ensure that our mining schools remain ahead of the pack internationally.’

Another example is on-site, hands-on learning experience, as facilitated by several mines that hosted Wits final-year students during their annual mine tour, providing practical insights into different mining methods. Or Sibanye Gold, which in 2016 hosted three groups of second-year students for their compulsory one-week workshop practice.

One of the continent’s largest gold miners, AngloGold Ashanti, sponsors and mentors schools, recruits top achievers into bursary programmes at universities and brings them into the company as management trainees. It awards community bursaries, vocational bursaries and child-of-employee bursaries to full-time students at tertiary institutions, and renews them conditionally on exam results, until the qualification is obtained. 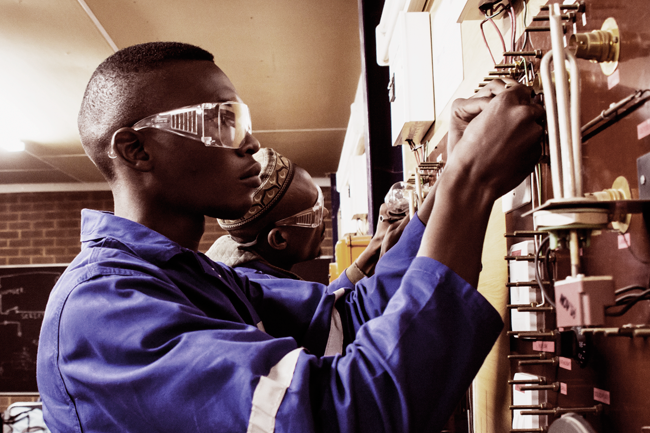 ‘We promote our bursaries through annual career guidance sessions and career expos, as well as in local newspapers and on social media. We also mentor our bursars and visit them regularly to make sure they are coping with their studies,’ says Nthite.

‘We also seek to broaden the base of our talent pipeline by offering workplace experience and training opportunities to young graduates from local communities through various internship programmes.’ He adds that the company fills the pipeline as dictated by current and future needs of the business.

Lonmin, meanwhile, also quotes ‘business need’ as a factor in deciding how many bursaries to award each year. The platinum miner’s bursary scheme covers financial and practical training, and involves a service-binding contract after graduation for a period that is equal to the number of years studied.

At a lower skill level, Lonmin launched a youth cadet programme in 2015, which trained 500 young people from the traditional local host community in basic mining skills. The three-month programme prepared the cadets for employment at local mines.

Northam advertised a similar cadetship in April this year, looking to recruit ‘unemployed youth without mining experience into the requisite skills programme so as to ensure they are employable in the mining sector’. Successful candidates would be trained on the Zondereinde platinum mine, receive a stipend for the three months of their temporary employment, with a view that Northam ‘may absorb cadets into permanent positions as and when vacancies become available’.

In the gold sector, Harmony has been operating a bridging school for more than two decades, assisting Grade 12 learners wanting to enter tertiary studies improve their maths and science performance. Selected learners are then offered bursaries or learner­ships. Harmony’s formal learnership programme saw 214 learners enrolled in 2016. Of these, 100 completed the programme and most now hold critical positions within the company.

In January, Harmony announced it had awarded 32 university and university of technology (former technikon) bursaries for the 2017 academic year. The majority (61%) target core mining-related professions, such as mining engineering, mechanical, electoral or chemical engineering and ore reserve management, with the remaining 39% focusing on non-core disciplines, which typically include finance, business science and human resources.

The company also launched a programme to award 10 additional bursaries, each valued at ZAR40 000, to qualifying students from the Matjhabeng district in the Free State. Over the years, 70% (175 of the total 231 bursary students) have come from communities in and around the mines.

Despite these efforts, youth unemploy­ment remains high across South Africa, particularly in rural mining communities. An obvious start for creating youth jobs would be for government to focus on the basics, such as ironing out regulatory uncer­tainties in mining, fixing the basic edu­cation system and lifting the economy out of its junk rating.

South Africa has long realised that the mines of the future need skilled young people to drive the transition from mecha­nised to data-intensive operations, or what Musingwini calls ‘Mining 4.0’. He reminded industry leaders and academia of their duty to develop the right kind of future mining leaders, and that ‘the time to create this arsenal of skills is now’.