It is not uncommon for the mining industry to be chastised for its water-use practices, or for it to face criticism over polluting or wasting this most precious resource. In South Africa, the Water Conservation and Water Demand Management Strategy, which promotes efficient water use, is aligned with the National Water Act, emphasising effective water resource management. Despite the existing legislation, it is ultimately up to the mining houses themselves to implement water management programmes, and to incorporate new technology into their operations to improve the use and treatment of water.

Craig Sheridan, director of the Centre in Water Research and Development at Wits University’s School of Chemical and Metallurgical Engineering, believes that the mining industry is conservative and somewhat resistant to new technologies. ‘When a new technology does come around, the pipeline takes a while,’ he says. It’s not as if these technologies do not exist – indeed, there’s ‘no shortage of available technology, regardless of where you are in the world’. Instead, it is more a matter of willingness to adopt it.

Any and all new technologies being developed need to first and foremost look at efficient water use, says Sheridan. ‘So, for example, when you have a reticulation system piping from point A to point B, once it’s in your system, the focus should be around not losing it,’ he says, adding that ‘losing it’ means pumping it out to a tailings facility and letting it evaporate. This efficiency stands true for any industry – not just mining, he says.

‘The future for any industry is [about] making do with what little you get without impacting society. It’s about cleaner production and not polluting in the first place. Though in South Africa, mines are generally very responsible. I think a lot of the issues we have with acid mine drainage [AMD], for example, are legacy issues – they’re an inherited responsibility.’

Laetitia Coetser, associate partner and principal water and environmental scientist at SRK Consulting, says that worldwide poor commodity prices, increased labour costs, the pressure to maintain traditional mining tech­nology rather than employing a smaller workforce using modern mining technology, and expectations from shareholders to show profits, are among the reasons why mines are reluctant to prioritise water management if capital is required. Often, the internal cost of treating water is being externalised, which has consequences for downstream users.

‘In order to achieve maximum economic returns and optimal benefits to all stake­holders, a broad range of aspects needs to be consi­dered, including integrated water and waste management. The purpose is to reduce developmental costs, ensure environmental compliance and to reduce environmental liabilities,’ says Coetser.

AMD may be one of the best examples that illustrate not only the legacy of long-term water pollution by mines but also current resistance to change, she says. ‘Despite progress being made in South Africa to legally address mine closure and mine water manage­ment, and mining practices changing to conform to new legislation, many challenges [remain]. Environmental issues, including water management, are often viewed as hurdles that need to be overcome, impacting on the profitability of a mine. Authorities are very strict up to the point of issuing licences and permits, etc, but that same level of commit­ment is lacking with regards to licence-holders being held accountable when it comes to implementation of the management plans. The lack of enforcement of environmental legislation further contributes to the scenario.’

According to Andre van Coller, water geosciences divisional manager at Digby Wells Environmental, several new technologies and innovations have been implemented by mining companies to reduce the impact of water usage. These include treating waste streams to recover any residual value in them and removing sulphide minerals to treat these separately in an attempt to render all the waste benign; depositing more waste back into mine workings to reduce long-term waste impacts and fill up voids left by extraction; and separating potential problem elements such as arsenic and antimony, and treating the smaller and more concentrated waste streams. Other efforts include better regional water management to reduce impacts and ensure that a better and more cost-effective general solution for all is found, he says, along with innovations and changes to the conventional tailings dam designs to reduce vertical seepage and improve the liner system while also reducing costs. 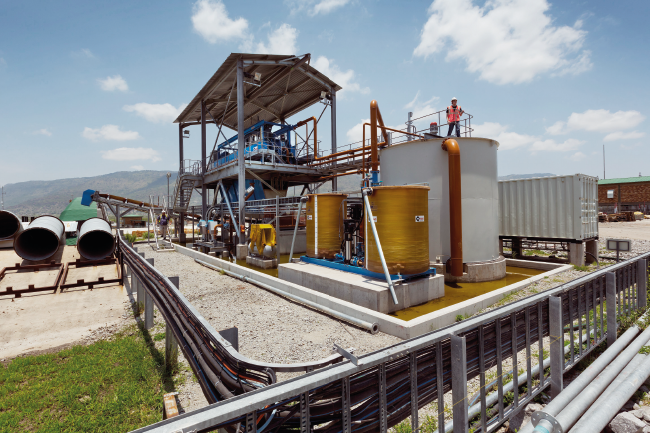 ‘These are examples of where the mining industry’s impact on quantity and quality can be greatly improved,’ he says, adding that stormwater management and maintaining good water balances ‘help reduce discharge to the environment by reusing/recycling as much water in the mining process as possible’.

Manda Hinsch, partner and principal water and environmental scientist at SRK Consulting, explains some of the new technologies, including a pilot plant that was recently built based on barium carbonate disperse alkaline substrate, which uses wood chips coated with barium to treat mine-affected water. ‘Polluted water is pumped into tanks and allowed to react with the barium-coated chips, which successfully treat the mine-affected water.

‘By using this passive system, the water is being treated to almost potable standards, which provides great opportunities for use of this water by other sectors, including muni­ci­palities and irrigators,’ she says.

Another innovative design involves the pumping of excess water from underground mining operations into a holding dam, Hinsch explains. The water is then being desalinated through a membrane plant or electro dialysis reversal, and further desalinated using a spiral reverse osmosis membrane.

The Water Research Commission, meanwhile, in partnership with Anglo Coal, Exxaro and South32, is undertaking a demon­stration project on 60 ha of allocated land, which uses poor-quality mine water for soya bean and wheat production.

As technology becomes more prevalent and sophisticated, so more and more data is generated. If properly analysed, this data can be useful for tailoring systems and processes to achieve better output. Indeed, according to Coetser, big data is used to drive innovation, identify potential pitfalls and stimulate growth.

‘Modern big data platforms can assimilate vast amounts of heterogeneous, real-time inputs from multiple sources. These, in turn, extract real-time predictive and prescriptive analytics to drive operational excellence. Guesswork is replaced with information-based strategies through end-to-end simulations across the mining value chain,’ she says. ‘It is anticipated that the scale and complexity of the data generated through mining processes may create more value than any other technological innovation in the industry’s history.’ 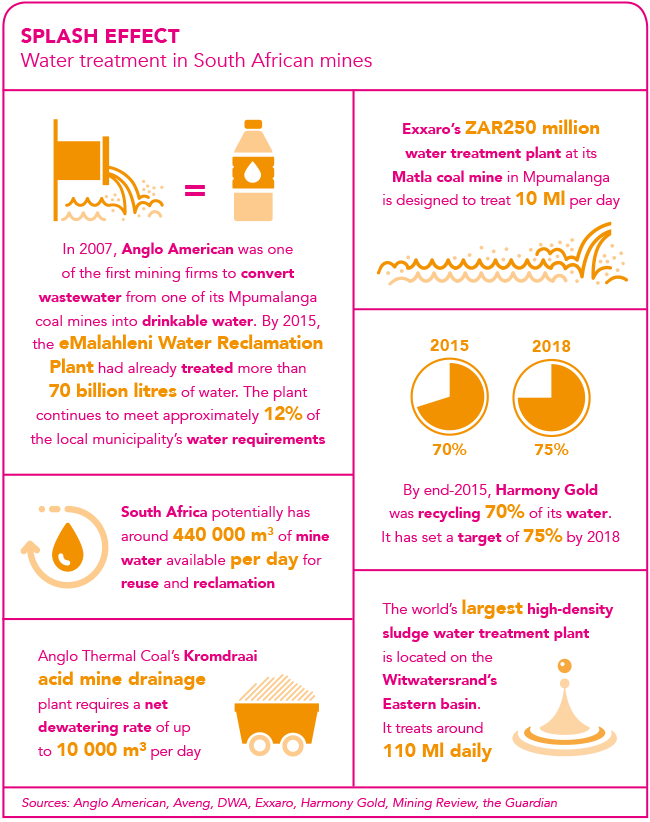 Better insight into data may result in mines being proactive rather than reactive, Coetser continues. ‘Casual data can be used at each of the mining process steps to improve operational effectiveness, enabling higher yields. Big data analytics make it possible to identify and accommodate the necessary changes without the usual risk, by providing research to support arguments for change.’ Moreover, big data may assist mines in improving production and reducing costs across a range of mining activities, she says.

‘Historically, they tend to default to the “tried and tested” rather than risk being innovative due to the potential to disrupt current operations,’ she says. ‘The challenge will therefore be to convince the mining industry to allow innovative approaches to drive decisions.’

Sheridan argues that when companies undertake their initial environmental impact assessments, they need to consider what will make the most sense on an ongoing basis. ‘The question is, can you derive more benefit from the resource overall than you will pay afterwards cleaning up what you took out? At the moment, I’m not sure we can say that for a number of our mineral-extraction processes.’

In short, it’s a matter of upfront focus, he adds. ‘Before we dig a hole, what do we want to get out of that hole and what are the forever effects? Because mining is forever. We need to put more thought into things before we do them – and that’s globally, not just in South Africa.’