Few industries were as well positioned to deal with the disruption of the coronavirus as mining in South Africa. While production volumes were still lower at the end of 2020, the industry is weathering the storm and making money hand over fist. According to the most recent edition of PwC’s SA Mine publication, cash generated from operations was 50% higher by end-2020 compared to 2019.

‘Three or four years ago, this would have been a totally different story,’ says Andries Rossouw, Africa energy, utilities and resources leader at consultancy PwC. Mining companies then were dealing with the consequences of being caught off-guard by plummeting resources prices in 2014, and most of them racked up record losses. But they have spent the years since then buying down debt, disposing of marginal or problematic assets and consolidating their balance sheets.

The big Johannesburg Stock Exchange-listed players have been at the forefront of the move to greater resilience. The reforms have been effective enough that four of those mining companies are now on PwC’s list of the international Top 40, up from two a year ago.

Impala Platinum and Sibanye-Stillwater have joined perpetual top-flyers Anglo American and AngloGold Ashanti on the list this year. Sibanye-Stillwater epitomises the consolidation process. Just two years ago, analysts were nervous about the scale of the debt pile the company had accumulated to finance platinum acquisitions in South Africa (notably Lonmin) and North America (Stillwater). At the time, the company’s debt was 2.6 times earnings, which some analysts felt was unsustainable.

Yet Sibanye-Stillwater had sorted out its debt pile before COVID-19 broke. By the end of the first quarter of 2020, it had liquidity of ZAR18.3 billion and was sitting on a cash pile of ZAR16.4 billion. Like other big South African mining companies in the gold and platinum mining sub-sectors, it successfully identified and implemented efficiencies, especially in its platinum assets where it closed a number of loss-making shafts.

The South African mining industry was under full lockdown for just four weeks – and, even during that period, exceptions were made. Many coal shafts kept functioning as they had been deemed an ‘essential service’, and big open-pit mines – Anglo Platinum’s Mogalakwena platinum operation and Kumba’s iron ore operations at Sishen and Kolomela – continued mining, while implementing mandatory precautions (social distancing, masks and so on). During the initial four weeks of lockdown, the share prices of mining companies plunged. Sibanye-Stillwater was down 60% for the period while Anglo American dropped 40%.

Figures released by Statistics South Africa in June show that mining production fell 47% in April. However, while matters looked extremely gloomy for the first few weeks of the lockdown, there was a light at the end of the tunnel. The ban on underground mining was lifted earlier than the opening of any other sector of the economy, on 16 April.

Mineral Resources and Energy Minister Gwede Mantashe announced that, under strict pandemic control measures (using WHO protocols), 60% to 70% of the workforce would be allowed to return to the mines.

The mining industry had thrown its weight behind government’s efforts to contain the virus from the outset. Because South African mines are big and socially significant in the localities where they operate – and many underground South African mines are much more integrated with population centres than their peers on the rest of the continent – they are considerable assets in the fight against COVID-19.

Companies in the sector were quick to make mine hospitals available and implement testing on staff. Mantashe, speaking soon after the lockdown was introduced, said that around 770 additional beds had been made available for isolation and quarantine through the efforts of mining companies by early April. The executives of all the bigger South African mining companies took salary sacrifices (of typically 30%), staff continued to be paid, and community responsibilities were stepped up. 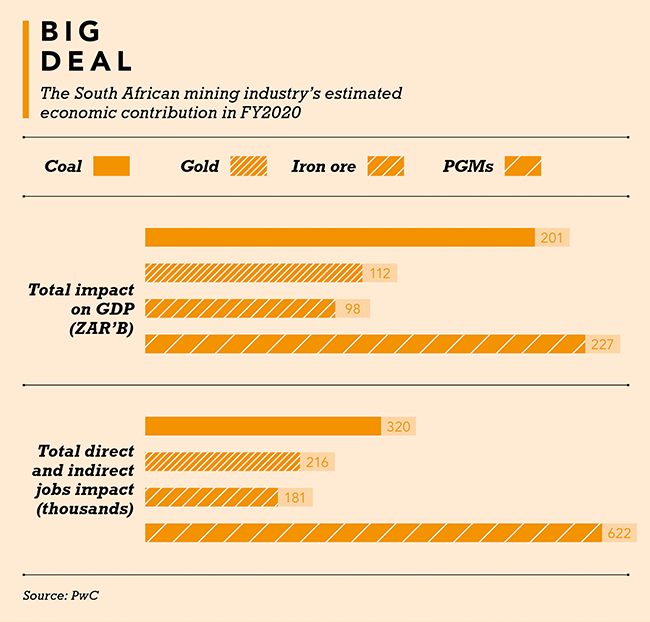 Rossouw notes that COVID-19 allowed ‘miners to demonstrate their importance in their local communities’. He has nothing but praise for the willingness of the industry to ‘act decisively to support employee education and health-worker readiness, and secure the supply of masks, sanitisers, temperature monitors and influenza vaccinations’.

In the second half of the year, South Africa’s mining industry benefited as global (especially Chinese) demand recovered much more rapidly than expected. China underwent the classic V-shaped economic recovery that all governments had hoped for, with growth for 2020 expected to average just under 5% – a far cry from the gloomy predictions of just a few months prior.

China’s recovery saw the prices of platinum and iron ore surge. Platinum reached more than US$1 000/oz in early December and iron ore hit an eight-year high (US$147/ton) at the same time. Gold benefited from its role as a hedge against uncertainty, with its price climbing to more than US$2 000/oz in the middle of the year. It had fallen back to the US$1 800s by December, and many analysts expect the price to decline once the pandemic is under control.

Higher commodity prices and a weaker rand made 2020 a good time for South African miners. Gold Fields’ profits were up 300% and the company’s highly automated South Deep mine finally seems to be maintaining production at consistently profitable levels. ‘South Deep is an operation that’s now looking really competitive within our group,’ says CEO Nick Holland. South Deep is the only major gold mine to have started production in South Africa in the 21st century (2005).

Companies in South Africa’s biggest mining sub-sector – platinum – posted record profits in 2020. Impala Platinum’s profits were up nearly 400% for 2020, while Northam doubled profits to ZAR5.3 billion over the course of the year. While Northam has been a tightly run and reputable ship for many years, Impala was a highly stressed company as recently as 2018.

Some observers have asked whether the pandemic contains the seeds of something positive. Relations between Mantashe and big mining companies appeared much warmer during the crisis, partly as a result of the industry’s firm and helpful response. But the pandemic probably only screened deeper problems in the industry.

Peter Leon, partner and Africa co-chair at law firm Herbert Smith Freehills, argues that while ‘the COVID-19 pandemic was a massive and rapid shock’, the more enduring issues are structural and, in mining, uncertainties surround the regulatory framework. ‘It is absolutely imperative that South Africa attract more foreign direct investment [FDI].’ He adds that FDI into South Africa ‘has followed a steep downward trajectory since 2009’. In 2008 the country drew US$9 billion, but in 2019 the figure was just US$5.3 billion and, he says, looks likely to go even lower for 2020. Leon argues that necessary reforms need to go well beyond the immediate mining investment climate and encompass both state-owned enterprises and labour markets.

Minerals Council South Africa (MCSA) CEO Roger Baxter agrees with Leon’s general diagnosis. ‘South Africa was already in an economic crisis before COVID-19,’ he says. The decision by Moody’s to downgrade South Africa, as the COVID-19 crisis was breaking, ‘was not unexpected’. The ratings agency subsequently downgraded the jurisdiction another notch in the second half of the year. Baxter argues that ‘mining-related reform should centre on policy and regulatory certainty, stability and competitiveness’.

In August, the Department of Mineral Resources and Energy withdrew an appeal against a 2018 court ruling on the ‘continuing consequences’ clauses in the state’s Mining Charter. The draft charter had insisted that mining companies must maintain a level of black ownership (which it raised from 26% to 30%) throughout the life of a mining permit even if the original black partners opt to ‘cash out’. The MCSA argues that a once-off BEE deal conforms adequately to the goals of the charter and that to expect a continual ‘topping up’ is onerous. MCSA president Mxolisi Mgojo noted that ‘relationships [between government and industry] have been further enhanced during this working together with the department on COVID’. The honeymoon, however, did not last long and the old headwinds – regulatory uncertainty, unreliable electricity supply and adversarial labour relations – have re-emerged even as the industry shakes off the impact of the pandemic.

In October, Sibanye-Stillwater CEO Neal Froneman argued that South Africa was not a jurisdiction in which, in good conscience, he could advise his shareholders to invest, adding that dropping the court case over the Mining Charter did nothing to increase certainty. ‘Government will say, “well drop the court cases and you’ll get regulatory certainty”. No, we won’t,’ he said.

Sibanye-Stillwater is believed to be considering spending part of its 2020 windfall on gold assets outside of South Africa. Mantashe’s response was that the miner had ‘stolen’ its empowerment rating. The company was formed after parent company, Gold Fields, had already done its empowerment deal with Tokyo Sexwale’s Mvelaphanda Resources. To many, this response appears to confirm Froneman’s criticism.

The headwinds are affecting the willingness of mining companies to spend on expansion. Despite the enormous growth in profit, capital spend is up just 5%, which implies only maintaining production, not expanding it. South Africa’s big mining companies are, in some ways, in a situation at the moment. Many factors influencing the growth of the industry are out of their control and will remain so until there is greater impetus from government.