First and foremost, Thabile Makgala is an astute mining executive with nearly 20 years of experience in the sector, specifically in gold and platinum group metals. Her hands-on experience as a production mining engineer provided the grounding for a career that has included leadership roles at Gold Fields, AngloGold Ashanti and Anglo American Platinum. In June 2018, she joined the top ranks at Impala Platinum (Implats) as a mining executive. And somewhere along the way, she earned an MBA.

There is, however, one aspect that stands out in Makgala’s story and adds grit and gravitas: she happens to be female in a stubbornly male industry. As a result, she is asked again and again to explain her success in a sector where, in 2018, merely 16% of top management were female (an increase from 15% in 2015). At senior management level, women account for 17% (compared to 16% in 2015) and in skilled technical professions for 18% (no change from 18% in 2015), according to the Minerals Council South Africa (MCSA).

‘Patriarchy still exists, as some men cannot accept that women can work just as well as men,’ according to Thuthula Balfour, MCSA head of health. ‘Studies have shown that women are generally more qualified than the men at similar positions, which translates to women needing to prove themselves as competent through working harder or having better qualifications.’ She adds that the council decided to introduce a formal programme on women in mining in 2019, led by a member of the board, Deshnee Naidoo, CEO of Verdanta Zinc International.

‘A strategy is being formulated to define what the industry can do as a collective to advance women,’ says Balfour. ‘This will complement the individual company initiatives currently run by member companies.’ Balfour, Naidoo and Makgala are among 16 South African women featured in 2018’s list of Top 100 Global Inspirational Women in Mining, compiled for the third time by the London-based non-profit Women in Mining (WiM). It showcases the achievements of female high flyers in global mining (including supporting industries), with the expectation that these role models will encourage more women to follow mining careers.

‘There are still so many barriers to entry that women have to overcome to reach leadership positions in mining,’ says Makgala, who chairs the local advocacy group Women in Mining South Africa (WiMSA). It is a free platform that encourages women in the industry to network and benefit from mentorship and guidance. ‘When I started out in mining, there were no support networks. My first time underground was in 2001 and WiMSA was only established in 2010,’ she says.

Since then, the situation for female mining professionals has improved, but not nearly enough. As Makgala explains, ‘if the environment is not conducive for growth – regarding aspects such as support, mentorship, infrastructure – females leave the mining industry and join other industries. However, for those who choose to stay […] being offered the leadership opportunity is a challenge itself’.

‘Women are questioned about their abilities, and most are told they have leadership gaps they need to attend to before being offered leadership positions.’ More and more mining companies, however, are getting it right.

An example is Mpumi Zikalala, a chemical engineer who rose through the ranks at De Beers, where she made history as the first female GM of Kimberley mine in 2007 and has subsequently held various leadership positions. In early 2019 she was appointed as MD for De Beers Group Managed Operations, being widely hailed as the best candidate because of her extensive experience in mining and within the company.

In addition, De Beers announced that its group CEO, Bruce Cleaver, won the ‘inclusive leader’ award at the 2018 Gender Mainstreaming Awards. Under his guidance, the group launched a three-year US$3 million partnership with UN Women and more than doubled the appointment of women into senior leadership positions in the 12 months leading up to September 2018.

Cleaver’s nomination citation says that he positions gender diversity and inclusion as ‘a strategic priority for the business’, making sure that it’s an agenda item at every quarterly exco meeting. ‘This embeds the programme, giving it credence and ensuring it remains front of mind for those in the highest positions for the business.’

Implats, meanwhile, announced the promotion of a female employee who (like Zikalala at De Beers) has come up through the in-house talent pipeline: Nonkululeko Mabuza started out as an Implats bursary recipient in 2005 and broke new ground by becoming the first female mining manager at the company’s Rustenburg operation in March 2019.

During her mining engineering studies at Wits University, Mabuza conducted vacation work at Implats and later participated in the company’s training programmes. ‘Mining companies do have the power to change the gender balance, and should not rely on legislation alone,’ says Makgala. ‘Decisions made by a company about workplace diversity are based on the company’s beliefs and norms, and it is these norms and thinking that influence how appointments and promotions relating to women in mining organisations are made.’

According to Gold Fields, its board approved a diversity policy during the 2018 financial year and diversity training was rolled out to managers. According to its 2018 integrated annual report, Gold Fields plans to ‘continue to enhance diversity by accelerating the development of female employees’ and to ‘improve ranking in the Bloomberg Gender Equality Index’. 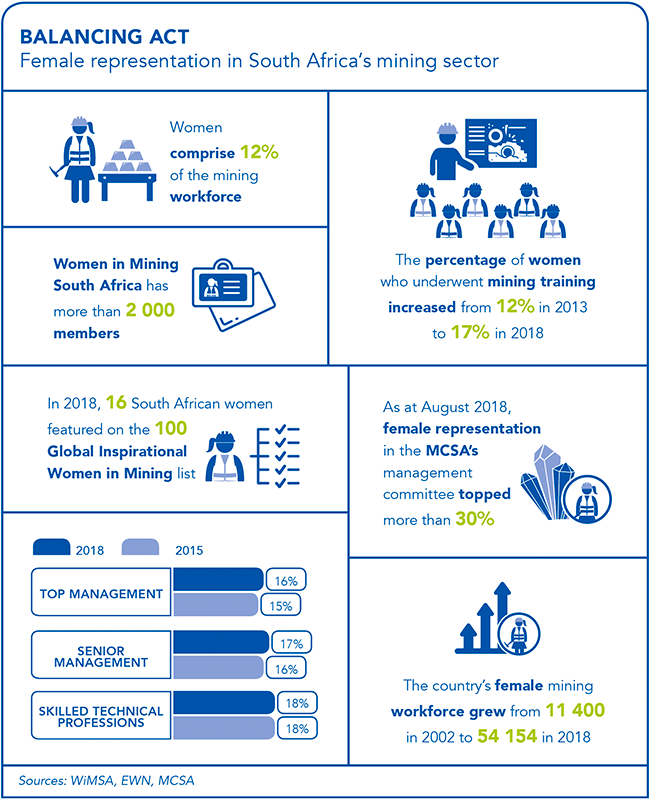 The 2019 index, which tracks gender equality in publicly held companies (with a combined worldwide market cap of US$9 trillion and more than 15 million employees), also features Harmony Gold and Anglo American. ‘Gender equality is a prevalent social issue – and a business imperative,’ states Anglo American in its 2018 sustainability report. ‘By year end, women made up 20% of our overall workforce (2017: 19%) and 28% of managers (2017: 26%).’

The group says it’s addressing inclusivity and diversity imbalances by reviewing certain policies to ensure they are gender-neutral and up to global standards, as well as by ‘continuously shaping our corporate culture’. Furthermore, it has established colleague networks, including one in Johannesburg for female staff (WoMINE).

To achieve gender balance at all levels, Anglo American says it’s currently making ‘a series of targeted changes to recruitment, succession and talent management, mentoring and other processes to support our goal of making sure we access the widest possible talent population’.

In addition to corporates developing female talent through internal skills and training programmes, there’s something that female leaders can do for other women, according to Christine Ramon, CFO at AngloGold Ashanti. ‘Women leaders can actually break the mould,’ she said in an interview with CFO magazine. ‘When I joined AngloGold Ashanti, there wasn’t one woman in the finance executive team. I brought two in: our chief information officer and our senior VP of finance. Sometimes you have to take a leap of faith on a person with high potential and give them an opportunity – the kind of opportunity that’s often given to a man.’

External support structures such as mentorship, personal coaching and networking are also crucial to adequately equip women to take on leadership roles in mining, says Makgala. Personal coach Briony Liber, who has a mining background and is actively involved at WiMSA, helps her clients navigate the transition between technical delivery and taking on the responsibility of managing others. ‘I coach men and women and this definitely isn’t a gender issue,’ she says.

‘Generally leadership skills aren’t competencies that we develop at university, and when someone moves into a management position, they often feel like they can no longer ask for help.’ While some of her clients are mid-level managers and executives, she says her passion lies in coaching younger professionals, because she believes this is where long-term change happens. ‘I hold their hand metaphorically, and am there to give them feedback that often their managers either aren’t equipped to give or aren’t interested in giving,’ says Liber.

The only limitation she sees for top female talent in mining is that the availability of positions in head office is limited, so the competition is fierce. ‘I say head office, because I have observed a lot of women want to leave the operations, because life is challenging in many areas in which our mines are located,’ she says and explains that the sector is losing women who move into leadership positions in other industries where the work-life balance is better, not because they can’t ‘make it in mining’.

Which again underlines the importance for mining companies to create a gender-inclusive culture and HR policies that appeal to female leaders in the mould of Makgala, Balfour or Zikalala, who can take South Africa’s mining sector into the future.