From inception in 2000 up until early 2014, ZCCM Investments Holdings (ZCCM-IH) carried a net debt of ZMW1.83 billion owed to the government of the Republic of Zambia (GRZ). This debt was inherited from Zambia Consolidated Copper Mines (ZCCM) Ltd as part of the privatisation process.

What happened to this debt in early 2014 is a story of success. A story of resilience. A story of value creation. A story of a giant that awakened after years of slumber.

ZCCM-IH stems from the then ZCCM Ltd, a copper mining conglomerate that was incorporated in 1982 following the merger of Roan Consolidated Mines and Nchanga Consolidated Mines. Prior to privatisation, ZCCM controlled 10 operating mines and one power company. It was then privatised in 2000 under a privatisation programme that unbundled the various operating mines into packages that were sold off as separate entities to the private sector. This was done in a bid to promote diversity of ownership and minimise political and economic risks.

After privatisation, ZCCM was no more and in its place, ZCCM-IH was born – stronger, smarter, leaner. This new company retained minority shareholding in each of the privatised mines. The GRZ retained a significant shareholding at 87.5% in the new entity, with the balance of 12.5% held by individuals and institutional investors spread around the world.

Recapitalisation of ZCCM-IH
At the general meeting of company members held on 24 February 2014, the shareholders unanimously resolved to recapitalise ZCCM-IH through a clawback rights offer transaction. On 25 March 2014, ZCCM-IH announced that it had concluded the restructuring of its balance sheet. This achievement was mainly the result of efforts by the GRZ in its capacity – as the majority shareholder – to strengthen ZCCM-IH’s balance sheet in order to reposition and attract new investment into the company.

As part of the balance sheet restructuring, the GRZ converted the debt owed to it by ZCCM-IH into equity via a rights issue.

Through a debt-settlement agreement between the GRZ and ZCCM-IH signed on 25 March 2014, ZCCM-IH’s net indebtedness of ZMW1.83 billion to the GRZ was converted into equity, thereby satisfying the issuance and subscription for 87.52% of the new shares by the GRZ.

CLAWBACK RIGHTS OFFER
Under a clawback rights offer, fresh capital is raised in advance or upfront from one or a few investors or any underwriter. Afterwards existing shareholders have the opportunity to participate and maintain their respective shareholding levels by subscribing for their shares by buying back from the upfront subscriber or underwriter.

The ZCCM-IH clawback rights offer opened on 12 May 2014 and closed on 13 June 2014. The offer involved the issuance of four new shares for every five shares already in issue.

The balance of 12.48% shares were subscribed for by the National Pension Scheme Authority (NAPSA) as the underwriter of the clawback rights offer. Minority shareholders could now exercise their right to clawback their shares to maintain their existing shareholding level in full or in part if they wished to. Zambians in addition to any interested domestic and foreign investors could now invest in ZCCM-IH.

Simultaneously, ZCCM-IH raised fresh capital on the 12.48% portion of the rights offer, amounting to ZMW260 759 573, which was underwritten by NAPSA on a clawback basis. The clawback arrangement allowed the minority shareholders of ZCCM-IH (who, before the rights offer, held 12.48% shareholding in the company) to also fully participate in the share rights offer at the same price as the GRZ.

The primary purpose of the rights offer was to recapitalise ZCCM-IH in order to strengthen the company’s balance sheet in the immediate term, and unlock value for the benefit of all shareholders in the future. 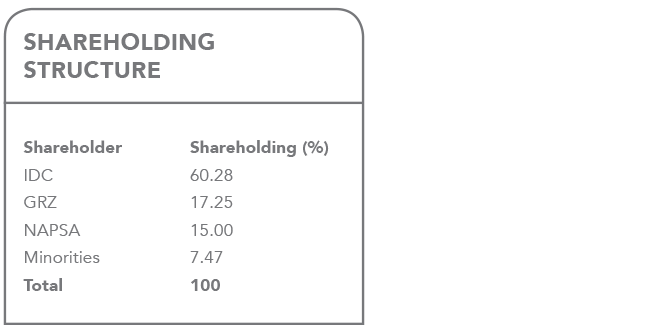 SHAREHOLDING STRUCTURE
The company’s majority shareholders are the Industrial Development Corporation (IDC) – an investment company wholly owned by the Zambian government – while the rest comprise institutions and individuals from around the world. 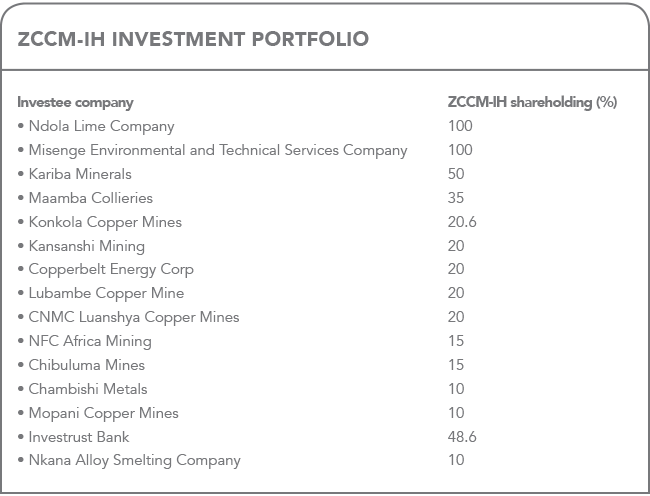 ZCCM-IH INVESTMENT PORTFOLIO
As an investment holding company, ZCCM-IH has a number of subsidiaries, associates and investments mainly in Zambia’s copper mining sector. The company occupies a very unique and strategically advantageous position as an investment company, as it holds key minority interests across the mining industry in Zambia.

It also has a key strategic minority interest in the Copperbelt Energy Corporation, a power distribution and generation company.

Through diversification, the company is relentlessly and actively pursuing investment opportunities in other sectors such as real estate, agriculture and energy.

The goal is to tap into new sources of consistent and stable income while reducing the risk profile of our portfolio.