The problems facing South African mining are by now well known. The plunge in commodity prices since mid-2014 has put mining operations all over the globe on the back foot. Few are expanding, and almost everyone is focused on cost-cutting and restructuring in order to survive. South African giant, Anglo American – once such a dominant player in the domestic economy that it was referred to as ‘South Africa Inc’ – is in the process of selling off 30 of its 55 mining assets worldwide, including its South African platinum and iron ore mines.

Illustrating the adage that one person’s problem is often another’s opportunity is South African miner, Sibanye Gold, which has seized the opportunity to acquire Anglo American’s platinum assets in South Africa for a reported cash and share offer of ZAR4.5 billion, and with it the opportunity to apply its expertise in labour-intensive deep level operations in a new subsector. Anglo American Platinum has retained only its highly-mechanised opencast mines in the sector.

The state of the global industry is shown by PwC’s 2016 Mine Report, which states that the world’s top 40 mining companies posted a collective US$27 billion loss in 2015. According to the consultancy, this is the first time ever that a ‘collective loss’ has been recorded.

In South Africa, year-on-year aggregate production figures have been lower than the previous 12 months since September 2015. The biggest drop occurred in March when production was 17.9% lower than it was in March 2015. The primary driver has, of course, been lower international commodity prices. At January 2016, the Bloomberg Commodity Index was about 50% lower than it was at its peak in August 2014 although it has moved marginally higher in the course of the year.

For South African miners, market conditions have been exacerbated by difficult operating conditions. The industry is both over- and under-regulated. The country’s basic mining legislation has effectively been in limbo since President Jacob Zuma sent the Minerals and Petroleum Resources Development Amendment Act back to Parliament in January 2015.

The act is meant to regulate mining investment and was intended, in the words of the previous Minister of Mineral Resources, to ‘provide certainty’. But the four-year long process has achieved the opposite.

Deputy Minister of Mineral Resources Godfrey Oliphant has promised a final version in November, six months later than the deadline given by the current minister, Mosebenzi Zwane earlier in the year. At the February 2016 Mining Indaba held in Cape Town, Zwane told delegates that the bill would be finalised in ‘the second quarter’.

The industry wants recognition of the ‘once empowered, always empowered’ principle, while government insists on the 26% benchmark

Yet another layer of uncertainty bedevils the regulatory environment as a result of an as yet unresolved disagreement over another piece of legislation – the draft Mining Charter. Earlier this year, Zwane published a draft of this legislation without consulting the industry. Mining companies must meet the conditions laid out in the charter to retain the state-issued mining licences they need to operate.

The key condition is that 26% of every company is owned by indigenous black interests. This is a condition that has prevailed since the first Mining Charter, initiated by the industry, in 2002. All the bigger mining companies claim to have complied, although in many cases their ownership profile has dropped back below the prescribed 26% as a result of ‘black’ interests cashing out.

The industry wants recognition of the ‘once empowered, always empowered’ principle while government insists on the perpetual maintenance of the 26% benchmark.

Uncertainty is exacerbated by the criteria implemented in practice by other state agencies, such as electricity supply parastatal Eskom, which defines ‘black empowered’ as ownership equity of ‘50% plus one’.

While ownership and security of the right to mine is affected by the absence of regulation, over-regulation is, however, prevalent in other areas. Labour conditions are a notorious component of the mining environment, with the 1997 Basic Conditions of Employment Act – yet another piece of legislation that was not properly negotiated between government and industry – regulating working hours in a way that makes it more expensive to achieve adequate hours at the mining face, especially in deeper mines.

The industry has adapted to these conditions although at the expense of labour-intensive production in favour of greater mechanisation. The number of individuals employed in mining in South Africa has virtually halved over the last three decades, from more than 800 000 in the 1980s to 462 000 at the end of 2015.

Cost-cutting has made further inroads since then, with trade union Solidarity suggesting that the sector looked likely to lose 29 000 jobs in 2016.

Jobs are a contentious issue between government, which regards ameliorating the country’s 26% unemployment rate as a priority, and mining companies fearing that aggressive cuts will bring the wrath of the licensing authority down on them. South African miners have become adept at minimising – or at least being seen to minimise – jobs losses in their restructuring. In June, Anglo American announced that job cuts at its Union and Twickenham platinum mines would be ’85% less’ than originally planned (from 2 000 to 300) by ‘redeploying’ miners to other operations.

Government-ordered safety stoppages are another regulatory-based burden. There is little wrong with the health and safety regulations themselves. Indeed, the conditions prevailing in deep-level mining are so geared towards safety that last year’s 77 accident-related fatalities were the lowest in the history of the industry. 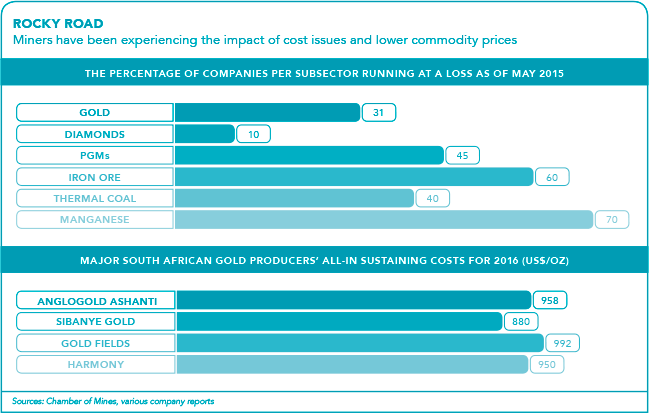 Government has said this is because it is vigorously applying Section 54 of the Mines Health and Safety Act. That clause mandates government inspectors to close down entire mines where they have identified a problem. However, this is costly and mining companies argue that the same end could be met by applying Section 55, which allows inspectors to simply order mine management to rectify safety issues and does not require a general work stoppage.

In August this year, AngloGold Ashanti CEO Srinivasan Venkatakrishnan said that stoppages ordered by government inspectors had cost the company 44 000 oz of gold in the first half of 2016 (worth some ZAR834 million). The setback to production is not simply a matter of the time period that operations are shut down, which is usually insignificant compared to the two to three weeks it takes to ramp up from zero to 90% production after a shut down. However, AngloGold’s problems are somewhat cushioned by the quite startling improvements in the conditions facing South African gold miners.

Globally, the gold market price recovered some 30% in 2016, from US$1 050 last December to US$1 372 in July 2016. Gold is an investment for troubled times and there’s all too much uncertainty in the world economy at the present time.

Unknowns include the knock-on effect of the UK leaving the EU, the impact of trade protectionism in the US (articulated in its most extreme form by presidential candidate Donald Trump), negative interest rates in Japan and parts of Europe, and war in the Middle East. The World Gold Council (WGC) calls this a ‘perfect storm’. It has driven demand to 1 064 tons in the first half of 2016, a level last seen in 2009, says the WGC.

That said, South African gold producers have done even better than their international counterparts because they have also had the benefit of a weak local currency. Local gold producers incur costs denominated in rands but their revenues, derived from international markets are in US dollars. Among other things, this makes gold a splendid rand hedge for South African investors.

Under these more favourable conditions it is AngloGold Ashanti that has performed well. In mid 2016, the company announced that headline earnings were forecast to be between US$87 million and US$99 million, compared to a headline loss of $128 million a year ago. At the same time AngloGold’s cost-cutting exercises have borne fruit with total costs down 7% for the year. It spends US$911 to produce every ounce of gold it mines, the cheapest rate in South Africa.

Other mid-year results illustrate the upturn. Gold Fields’ South Deep mine – the newest and most mechanised gold mine in South Africa – has struggled since the company acquired it in 2006. However, in July the company announced that the mine had seen an 87% year-on-year increase in gold output. Gold Fields posted a US$115 million net profit for the six months to June, compared to a US$2 million loss the year before. Earlier this year the company said it expected to reach break-even only at the end of 2016.

The gold sector in South Africa is in the process of demonstrating the validity of the advice given by most analysts when resources prices started their downward tumble in 2016 – that miners need to sit tight, cut costs and wait for markets to turn.